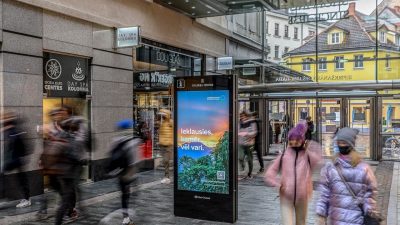 Conservation International launches a new global out of home (OOH) campaign, “Hear me while you can,” in partnership with Clear Channel to make sure nature has a voice at the table at COP26.

The campaign invites the public to immerse themselves in the beautiful sounds of nature, and learn more about why we need to act now to protect nature.

The campaign will run across Clear Channel’s global digital advertising footprint. The campaign will launch in Glasgow, then expand across the world through the duration of COP26 to reach millions of people.

Conservation International announces a new global OOH campaign with Clear Channel, “Hear me while you can,” to make sure nature is heard at COP26 and to inspire world leaders, delegates and people around the world to understand what will be lost if we fail to protect nature.

Over the duration of COP26, Clear Channel digital screens will showcase Conservation International’s new campaign, which invites passers-by to stop and listen to the beautiful sounds of nature.

The digital screens will feature a QR code which, once snapped, transports the public to conservation.org/HearMe, where they can listen to some of nature’s most majestic soundscapes, from the Amazon rainforest to South African savannah, from Southeast Asia mountains to the North Pacific Ocean, and learn more about Conservation International’s work to protect nature around the world.

Conservation International’s campaign invites world leaders and people worldwide to immerse themselves in the many voices of nature, and in doing so, be moved to believe that together, we have the power to protect and replenish those voices.

The campaign comes as nearly 3,000 delegates participated in the Convention on Biodiversity COP15 talks earlier this month, where governments agreed to pledge more investment to protect biodiversity. Conservation International warns more attention is needed to halt the unprecedented destruction for another reason: to fight climate change.

“Nature isn’t just something that is beautiful to see and hear – it is essential in the fight to slow climate change, to our very survival. The science on this is clear: if we don’t invest in stopping the destruction of nature, we will fail to avert climate catastrophe – even if we get everything else right,” said Dr. M. Sanjayan, CEO of Conservation International. “We are working across the global south – and now, here at COP26 in Glasgow – to drive investments to nature for the benefit of people and the climate.”

Nature can provide at least 30% of global action required to prevent the most dangerous impacts of climate change — yet solutions such as protecting, restoring and managing forests, mangroves and peatlands receive less than 3 percent of all global climate funding.

“Hear Me” gives a nod to the award-winning “Nature Is Speaking” films that Conservation International launched with MAL\FOR GOOD in 2014, and whose tag line, “Nature doesn’t need people. People need nature,” drives home the point that saving nature is really about saving ourselves.

Clear Channel is lending its support to the campaign by offering free advertising space on digital screens across its markets, in Europe, the Americas and Asia. This global scale has the potential to reach millions of people worldwide.

This global pro-bono out of home campaign builds on Clear Channel’s longstanding commitment to using OOH’s unique strengths, its mass reach and ability to build brand fame, to give a voice to some of today’s most pressing issues — in this case, climate change.

William Eccleshare, CEO of Clear Channel Outdoor Holdings, Inc. explains, “At Clear Channel, our ambition is to create a better world through the ways in which we use our out of home advertising platform. This can only be achieved if we protect the future first. We’re playing our part in two vital ways: first, by using the power of our medium to extend the reach and facilitate debate on important issues that often don’t get the attention they deserve. This includes our pro-bono campaign with Conservation International which we’re incredibly proud to be helping amplify so that people worldwide, and not just the delegates of COP26, are invited to the conversation.

“Second, we’re making tangible changes to how we operate as a business to reduce our environmental impact. For example, earlier this year we developed a prototype for a new piece of street furniture that cleans the same amount of air as 20 trees, and we continue to use recycled materials to build our bus shelters and partner with charities like Trees for Cities to create greener cities.”

Clear Channel is a signatory to the UN Global Compact and has committed to be Carbon Net Zero by 2050 across its global operations in line with the Paris Agreement. The company is spearheading projects and initiatives to drive sustainability across its business operations and will be reporting on its progress in an upcoming ESG report.